Well this week has been kind of slow. We’re recovering from the horrible last week. My littlest man got a stomach bug….a BAD stomach bug. I was giving half an ounce of pedialyte every 20 minutes around the clock to beat the dehydration. On top of that, my husband had an unexpected out of town work-related trip. Yeah, fun times. lol We did manage to keep up with our school work and only got one day behind in math. A lot of school time was spent on the bed as I held Drake and Nathan did most of his work orally.

Drake is all better now and so we eased into our week.
Last Friday the older three and I went to a Valentine’s party at the skating rink with a local homeschool group. Daddy came home in time to stay with Drake. The boys had a blast!!!
Nathan

Gabriel. They didn’t have skates in his size. 😦 He hung out with me and we visited the yummy desert table as often as he wanted! Plus he got to help put all the valentines we brought into the other children’s bags. He also helped put the candy everyone brought into the bags. He really enjoyed that!!!

The boys with their Valentine sacks. We made these quickly the morning of since Drake was so sick and we didn’t have time earlier in the week. 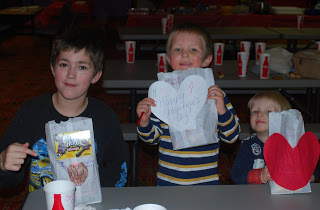 Nathan finished up another chapter in math and took his test. He did very well. All of his missed answers were just careless mistakes. I’m not sure how to handle that. He isn’t on adhd meds so just keeping him focus isn’t always the easiest.
We also started our new science, Apologia’s Astronomy. The boys LOVE it and so do I! It is so easy to read and I love the thinking questions and notebooking included at the end of a section, as well as the experiements.
We finished up our study on volcanoes. I had planned for us to make our own volcano this week and two days ago there was a show on the science channel all about volcanoes. We decided it would be perfect to do our own eruption after the show. All three boys really enjoyed the show and I can’t believe how much MORE than learned!! Kaleb has been quoting volcano facts ever since! Our volcano was very simple…play doh formed around a chemisty set beaker. Our first eruption didn’t go as well as planned. It was also the only eruption that was red (tinted with food coloring). We just decided to streamline the process and get to the good stuff…the explosion! Nobody really cared if it was red or not! =) It was a lot of fun and a GREAT little hands-on treat for the boys! 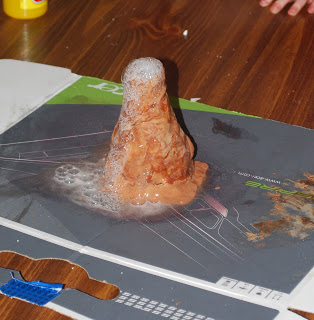 The rest of our week has been pretty laid back. We did English and a lot of book reading but not much else. We’re all trying to recover from last week’s lack of sleep.
We’ll hit the ground running again on Monday!!
Happy Valentine’s Day!!

One thought on “Weekly report”