Well I counted up the weeks and found that we just finished 21 school weeks. Now we didn’t work all week during a lot of that time since Daddy was home so much, but we’re counting it! Ha! We have roughly 15 weeks of schoolwork left so obviously we managed some work even with Daddy distracting us. 🙂

We jumped back into our science studies this week. It’s been sorely neglected. You know, I had ordered one of the books (like the main one!!!) needed for Elemental Science from Amazon before school even started. It never came. Then I had to find another and REorder. In the shuffle of school and fall sports starting and Daddy being home, we just kind of dropped it.

This week we learned about earthquakes, tornadoes, hurricanes, and volcanoes. We completed the earthquake and tornado experiments but we’re holding off on the volcano experiment until next week.
Of course the boys LOVED it. We watched videos of each natural disaster on YouTube as well as a couple on Tsunamis. We read a little about them and then did the experiments in the books. Then…my favorite part…we brought out our science journals that haven’t been touched yet, and wrote/drew about what we learned. I failed to get pictures of their journals this week but I did get a few of the earthquake experiment and a quick video of the tornado experiment. However, Blogger is being contrary and won’t let me upload the video. Maybe next week? 🙂

Everything else is going well. Kaleb is working on times tables and doing well, Gabriel’s phonics lessons are coming along nicely, and Drake is learning all about letters and numbers. Drake surprised me this week by wanting to write more and more. He spends quite a bit of time with dollar store alphabet workbooks, just tracing and writing those letters. 🙂

We had some excitement one day this week, and spend the night with Nana. Daddy was out of town. Nathan came home from school and told me about the three hour school lockdown that the school never called or texted me. Apparently a wanted criminal had escaped police custody near our home (!!!) and they had been looking for him most of the day. About the time Nathan was telling me about this, a storm developed in our area and knocked out our electricity. That was just a bit more than I was comfortable with handling on my own so we camped out at Nana’s house that night. 🙂  Thankfully the storm passed with no damage, the electricity came back on, and criminal was captured early the next morning.

The next day was less eventful.  A tree fell on our house. Thankfully it wasn’t a huge tree and actually didn’t do any real damage. 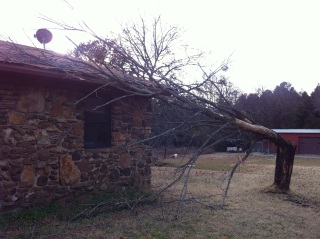 Nathan played his last jr high basketball game yesterday. Next time he plays a regular season game, he’ll be in SENIOR HIGH! Oh my gosh. Nathan turned 15 years old last week. I’m seriously thinking I can’t possibly be old enough to have a 15 year old who is almost in high school….can I?

Outside of our homeschool which was great, it’s been quite a tiring week. 🙂  Glad to put this one to bed and start fresh on Monday. We are SO very thankful that, even with all the chaos, we are happy, healthy, and safe. Many blessings.

Hope you had a great week and have a wonderful weekend! 🙂